With states and school districts around the country accelerating plans to return students to full, in-person learning, and the federal government’s strategies to vaccinate teachers by the end of April, it feels like we’re finally turning a major corner on the pandemic. It’s been a long and difficult year for parents, teachers and students alike in trying to balance social distancing with at-home or hybrid learning, but the growing pace of vaccinations and school reopenings means we’re close to finally giving our kids some semblance of normalcy again.

And not a moment too soon, according to a new independent research survey. Sophos Home commissioned Vanson Bourne to survey more than 1,000 U.S.-based respondents with school-aged children under 18 years old, 94% of which have had children attend school via remote learning at some capacity since the start of the COVID-19 pandemic. We asked parents about their online security concerns during the pandemic, and what they’re doing to keep their families safe – including how they’re securing school-owned and personal devices such as laptops, desktop computers, tablets, and smartphones that their children use. The survey was conducted in February 2021.

Findings show how parents’ pre-pandemic behaviors and attitudes toward at-home online security have exploded into genuine fears about their family’s vulnerability to cyber threats as many have spent the past year in front of screens and on home Wi-Fi networks. Perhaps most importantly, the findings provide new insights into addressable security gaps as schools around the country open their doors to more students – and their devices.

Two-thirds (67%) of parents fear they or someone in their family could be the target of an online attack in the next 12 months. At the same time, more than half (51%) of parents say that family members are more at risk of being hit by an attack now than they were 12 months ago. 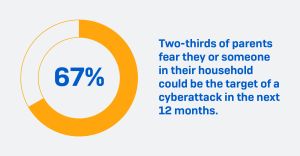 Almost all parents (93%) are worried about cyber threats affecting their families. The most common concerns are viruses and malware (54%), identity theft (43%), social media hacking (42%), and financial fraud (42%). 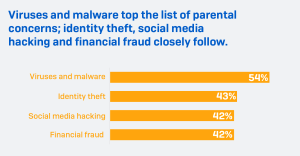 Alarmingly, 59% of parents do not set up separate user accounts on devices that their children use. Further, 49% do not have user passwords set up on these devices, leaving them open and unsecure for anyone to use. Only half (50%) of parents have added parental controls on devices that their children use, and only 42% have set up safe browsing or a web content filter. 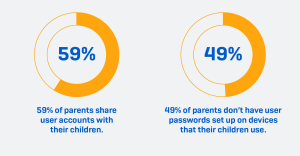 Who owns the devices and what they’re used for is mixed, which muddies the waters in both perceptions of who is responsible for securing the device and of their overall level of exposure. Of those who have school-owned devices in their homes, almost four in 10 (38%) say it’s solely the school’s responsibility for securing these devices. While that may feel like a safe assumption, it begs the questions of how schools are actually protecting these devices, especially considering last year’s rush to provide them to students in the sudden shift to remote learning. Many parents aren’t taking chances, with 24% reporting it’s their responsibility as parents to secure school-owned devices, and 35% saying it’s a shared responsibility with the school. 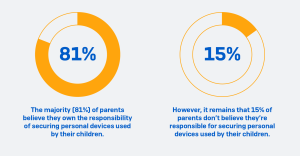 The silver lining is that despite the turbulence of the past year, most families have not taken their eye off the ball when it comes to online security. In fact, 55% percent say cybersecurity is still a top priority.

Despite this, there are far too many who aren’t taking the basic precautions to protect their families against online threats. Here are a few quick and easy measures that parents can take right now to better secure their family’s devices:

Sophos Home provides security and privacy for the entire family, making it easy for parents to secure and manage all of their family’s devices – including Windows PCs, Macs, iPhones, iPads, and Android phones. A new mobile app further enables parents to do so on the go from their iOS and Android devices, no matter where they are or where extended family members live.

Learn how other parents are using Sophos Home to protect their families, or download a free trial for yourself.