In this installment of our blog series, we will focus on Mispadu, an ambitious Latin American banking trojan that utilizes McDonald’s malvertising and extends its attack surface to web browsers.

We believe this malware family is targeting the general public. Its main goals are monetary and credential theft. In Brazil, we have seen it distributing a malicious Google Chrome extension that attempts to steal credit card data and online banking data, and that compromises the Boleto payment system.

Mispadu is a malware family, identified during our research of Latin American banking trojans, that targets Brazil and Mexico. It is written in Delphi and attacks its victims using the same method as the families described earlier in this series: by displaying fake pop-up windows and trying to persuade the potential victims to divulge sensitive information.

For its backdoor functionality, Mispadu can take screenshots, simulate mouse and keyboard actions, and capture keystrokes. It can update itself via a Visual Basic Script (VBS) file that it downloads and executes.

As with the other Latin American banking trojans, Mispadu also collects information about its victims, namely:

As in the cases of Amavaldo and Casbaneiro, Mispadu can also be identified by its use of a unique, custom cryptographic algorithm to obfuscate the strings in its code. This is used in all components, as well as to protect its configuration files and C&C communications. Figure 1 illustrates the core code implementing this algorithm, and Figure 2 pseudocode for the algorithm. 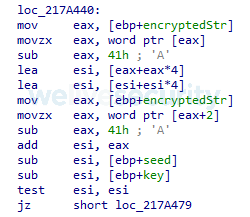 The banking trojan executable comes with four potentially unwanted applications stored in its resource section. These applications are all otherwise legitimate files from Nirsoft, but have been patched to run from the command line with no GUI. They are used by the malware to extract stored credentials from:

Mispadu also monitors the content of the clipboard and tries to replace potential bitcoin wallets with its own, as Casbaneiro did. However, from examining the attacker’s wallet (see Figure 3), it has not been very successful to date. Mispadu employs two distribution methods: spam (see Figure 4) and malvertising. While the former method is very common for Latin American banking trojans, the latter is not, so let’s look at it more closely. Figure 5 shows how the Mispadu attack unfolds. The threat actor placed sponsored advertisements (see Figure 6 for a Brazilian example) on Facebook offering fake discount coupons for McDonald’s. Clicking the advertisements leads the potential victim to one of the webpages shown in Figure 7. Regardless of a visitor’s OS, clicking the button there leads to downloading a ZIP archive containing an MSI installer. Occasionally, this archive also contains legitimate software such as Mozilla Firefox or PuTTY, but they are mere decoys and are not used at all.

Mispadu operators compiled two different versions of the banking trojan based on the country it attacks. Besides that, they decided to use different installers and subsequent stages for each attacked country. However, the logic of both chains is the same and we describe that general form below. Figure 6. Facebook ads set up by the Mispadu operators leading to fake McDonald’s coupon websites (translation of the ad title: “Use them on any September day! Independence coupons. Get yours now”) Figure 7. Malicious webpages offering fake discount coupons for McDonald’s Brazil (left) and Mexico (right) (translation of the main text of both: “This coupon can be used only once. I want! / Generate coupon”)

When the potential victim executes the MSI installer, a chain of three subsequent VBS scripts follows. The first script (unpacker) decrypts and executes the second script (downloader) from its internal data, as seen in Figure 8. The downloader script retrieves the third script (loader) and executes it (see Figure 9). Figure 9. Mispadu distribution chain downloader script (stage 2). Notice the hardcoded key is the same as in the previous stage.

The loader script is more complicated than the first two stages. It is locale-specific; it checks the language identifier of the potential victim machine to verify it really comes from the country targeted by the current campaign (Brazil or Mexico, respectively). It can detect some virtual environments as well; if a virtual environment is detected or the desired locale is not found, the loader quits.

Otherwise, the loader script continues by setting up configuration files (described in detail later) and downloading (i) a Mispadu banking trojan, (ii) an injector (DLL) used to execute it and (iii) legitimate support DLLs. Each file is downloaded in a separate ZIP archive as illustrated in Figure 5. We provide pseudocode for the decryption algorithm in Figure 10.

Finally, the loader script sets up persistence by creating a link in the startup folder and executing the injector. This is done via rundll32.exe by calling an exported function of the injector DLL whose name comes from one of the previously set up configuration files. The injector locates the encrypted banking trojan, then decrypts and executes it.

We found an open directory on one of the servers Mispadu uses, and files connected to a very similar campaign were stored there. Those files can be used to set up a webpage imitating AreaVIP (a tabloid website in Brazil) and to force a fake Adobe Flash Player update on its potential victims. We have not observed that campaign in the wild and believe it may be a setup for the future.

Since the Mispadu campaign targeting Brazil used the Tiny.CC URL shortener, we were able to gather statistics. As seen in Figure 11, this campaign produced almost 100,000 clicks, exclusively from Brazil. The clicks originating from Android are most likely the result of the fact that the advertisement is shown on Facebook regardless of the user’s device. You can also see that the campaign is recurring – one phase ended in the second half of September 2019 and emerged again at the beginning of October 2019. Both spam emails and the fake McDonald’s website are interesting in one more aspect: from where the fake coupon is downloaded. Mispadu’s operators abused the Russian Yandex.Mail platform to store their payload (see Figure 12). The most probable scenario is that the operators created an account on Yandex.Mail, sent an email with the malicious coupon as an attachment to themselves and then pointed the potential victim to a direct link to this attachment.

Figure 12. The URL from which the archive containing the malicious Mispadu MSI installer is downloaded

The use of configuration files is quite uncommon among Latin American banking trojans; yet, overall, Mispadu utilizes three different ones and it cannot function without them. All of the configuration files are either contained in, or obtained by, the loader script described earlier.

Mispadu’s execution configuration is stored solely in memory with data downloaded from one of its download servers (Remote server 1 in Figure 5). It contains three crucial pieces of information:

General configuration data are dropped to C:UsersPublic%COMPUTERNAME%[1], being named as the second letter in the victim’s computer name (so for a computer named “JOHN-PC”, the file would be named “O”). It is created from data contained in the loader script and in the execution configuration file and contains the version information, cryptographic key and file system paths.

C&C configuration data are stored to a file in the same location as the previous one under the same filename with “_” appended (“O_”, to continue the previous example). It consists of:

Mispadu chooses its main and backup C&C domains from these lists based on the current day of the month. It then tries to obtain an updated version of the C&C configuration file from that domain every few hours and replaces the dropped one with it. We believe the main idea behind this approach is to fill in the placeholders in order to activate the backdoor functionality.

It’s a good idea, just don’t do it with the malicious Google Chrome browser extension we have observed being distributed together with the Mispadu banking trojan in Brazil (see Figure 13). The extension (see Figure 14 is named “Securty [sic] System 1.0″ and claims to help you “Protege seu Chrome” (translation: “Protect your Chrome”). It consists of three malicious JavaScript files that we describe below. This simple component has only a single functionality: it creates a new Google Chrome window and closes all others. This component was not present in all samples we analyzed and we believe it is still in the testing phase.

The second component contains a hardcoded list of websites. In pages served from these sites, it looks for any input field containing “text”, “email”, “tel”, “number”, “password” or “radio”. If “CVV”, “COD SEG” or their variants are found anywhere on the website, the content of those input fields is sent to the attacker when the victim submits the information. This clearly reveals the intention of this part of the extension – theft of credit card data.

The third component is the most advanced one. First, using a DGS-like algorithm, it generates two strings based on current day of month and month number. Those strings are then used to form a GitHub URL in the form of https://raw.githubusercontent.com/%FIRST_STRING%/w/master/%SECOND_STRING%, where %FIRST_STRING% is a GitHub username. Data downloaded from the generated URL are decrypted into a different URL we will call payload URL.

This component also contains a hardcoded list of targeted websites, as the previous one did. If the victim visits one of these websites, a malicious JavaScript file specific to that website is obtained from the payload URL and dynamically loaded via JavaScript’s eval function.

Besides that, this component also attempts to compromise the use of Boleto, a popular payment system common in Brazil. The system has been an attractive target for attackers for a long time (you can read more in this paper from 2014). To pay using this system, you have to print a ticket (boleto). That contains mainly an ID number specific to the bank account that should receive the payment, and a barcode (see Figure 15). Payment is then done by either scanning the barcode or typing the ID number manually. Figure 15. An example of a boleto (source: Wikipedia)

Using a regular expression, the malware component tries to find the ID number and replace it with the attacker’s (obtained dynamically). Additionally, it abuses a legitimate website to generate the payment barcode using the attacker’s account number and replaces the legitimate one with that. The part of the code responsible for compromising Boleto is shown in Figure 16. Besides the already mentioned differences and the obvious fact that each variant of the Mispadu banking trojan targets a different set of banks dependent on country of residence, the Brazilian campaign differs from the Mexican one in several other minor aspects.

It seems to randomize the file system paths and filenames where configuration files are stored and the banking trojan is installed for each victim. Additionally, the loader script contains a part that is not used at the time of writing but that is ready to abuse Windows mshta.exe to execute the actual banking trojan instead of rundll.exe.

We have described its most recent distribution chain and focused on some interesting aspects like Yandex.Mail being abused to store the malicious payloads and the usage of malicious Facebook ads. We have analyzed the configuration files used by Mispadu as well.

Finally, we have talked about a malicious Google Chrome extension that we have seen Mispadu distributing in Brazil. This extension’s goal is to steal credit card information, sensitive banking information and attempt to steal money from its victims by compromising the Boleto payment system in Brazil.