These kinds of detections often lead to interesting, divergent attacks, which is what the detection teams are looking for. Diving down the rabbit hole, Howard and O’Donnell discovered a few intriguing twists to the convoluted attack, which included a Scheduled Task that started a Visual Basic Script file that, in turn, launches PowerShell and then literally pasted the text of the commands into the PowerShell window, rather than passing the command string as a parameter.

But let’s not get ahead of ourselves. Here is Howard’s root cause analysis (RCA) of the attack chain.

The attack analysis pivoted on some of the data collected from Sophos endpoint products using Microsoft’s Antimalware Scan Interface (AMSI). The root cause of the attack triggered our telemetry: a malicious script, delivered (most likely) via spam. In the example below, the user’s browser (Edge, highlighted in red below) started the attack chain, which you can see in this snippet of the threat case. 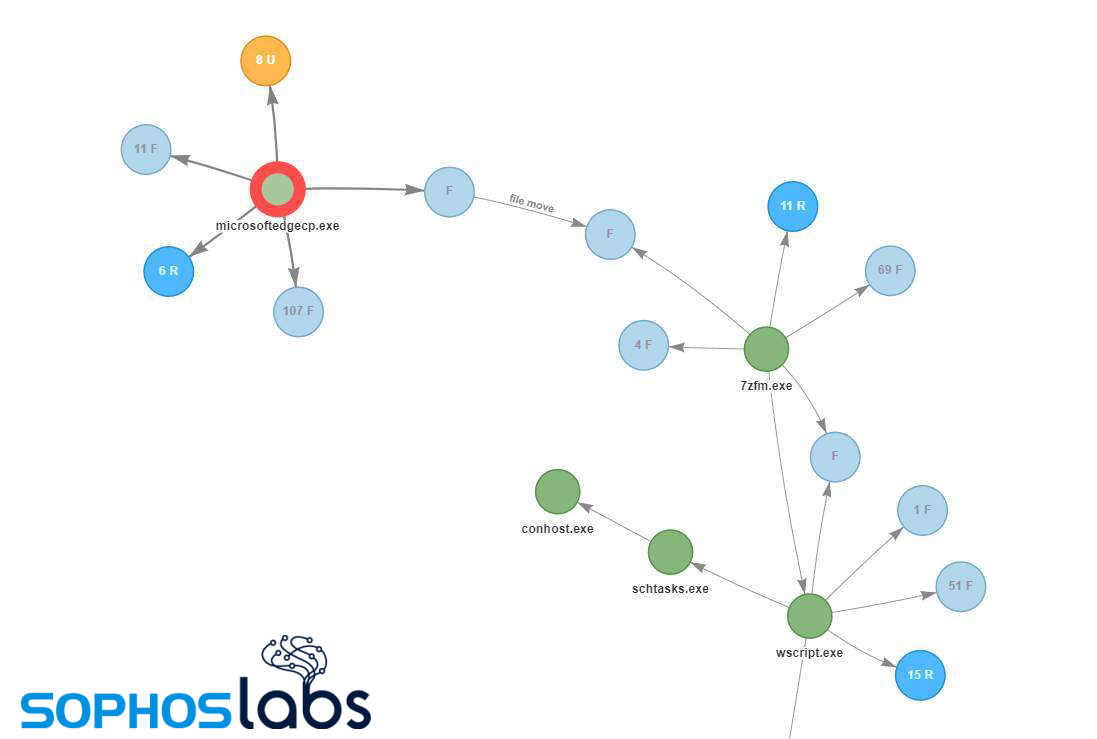 The attack begins when a recipient of the malspam opens the message attachment. The Visual Basic Script in the message attachment connects to a remote site, which is the entry point into a series of HTTP 302 redirects that eventually lead to a .Zip archive, hosted in OneDrive cloud storage, that contains an encoded VBS (VBE) file.

With the VBE file in hand, we set about reproducing the entire attack to get a complete picture, right through to the payload.

The initial VBScript writes out a second VBS file to the filesystem, and inserts three new entries into the Windows Registry that contain binary data, written out as 8-digit binary numbers. It then launches a system utility to create a new Scheduled Task that, at a predetermined time in the future, launches the VBS script.

When the Scheduled Task runs, it uses wscript.exe to launch the VBS. The VBS code launches PowerShell and then runs this code, which takes data from the VBS and inserts it into the system’s clipboard, where it can then programmatically “paste” the commands into the PowerShell window using the VBS SendKeys command. 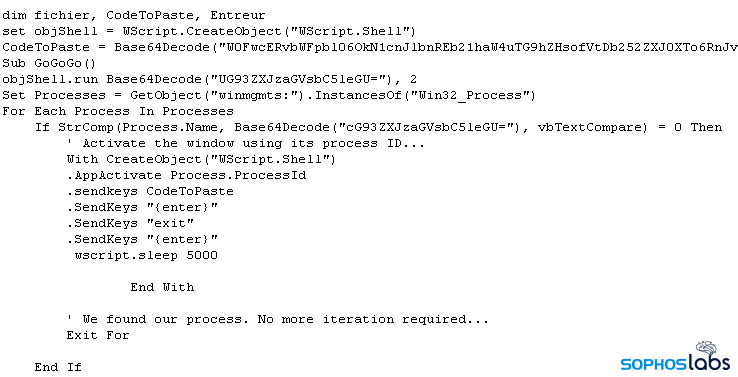 This neat little trick to deliver the powershell commands seems designed to evade detection by keeping the commands they execute under the radar, rather than attracting attention by spawning an instance of PowerShell with some interesting command-line parameters that might trigger all sorts of security product alerts. From this point on, the attack is fileless. 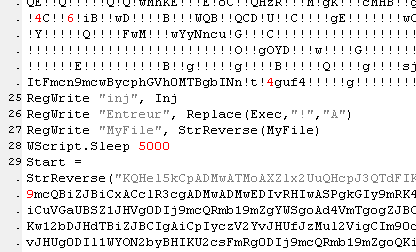 In the next step, PowerShell extracts a .NET decoder executable from one of the Registry blobs (labeled Entreur in the Registry) that the VBE had created earlier, and reflectively loads it by injecting it into a system process.

The decoder executable, in turn, extracts the .NET injector and payload blobs (labeled in the Registry as inj and Myfile, respectively) from the Registry. Then the injector loads the payload (injecting into the host application, msbuild.exe).

Notably, the initial Zip payload name (“Timbres-electroniques”) and several other strings, including the Entreur Registry key were comprised of words from the French language. Some of the targets of these attacks were French firms.

The diagram below summarizes all this and illustrates the key components of the attack chain. 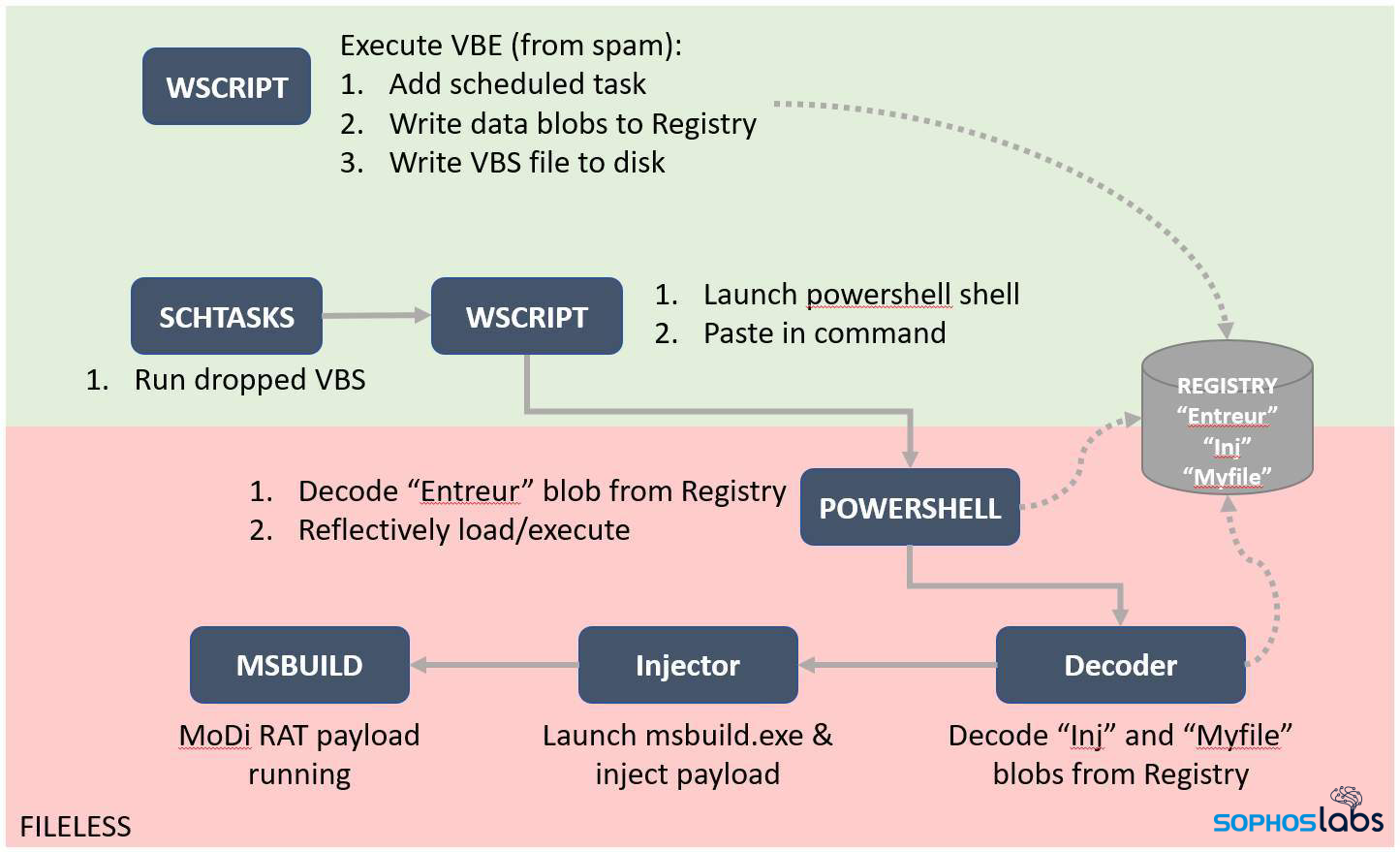 The three .NET executable layers (decoder, injector, and payload) do not touch the disk, but we proactively blocked the attack based on our recognition of the technique the attackers employ to deliver the payload filelessly.

Despite already proactively blocking this attack, as a result of our further investigation we were able to enhance existing detections to provide additional resilience against similar attacks we might see in the future.

Why you should upgrade from older Windows

Microsoft’s AMSI framework that helps us intercept and neutralize these kinds of attacks is only available on certain recent flavors of Windows (Windows 10, Windows Server 2016 and Windows Server 2019). If there’s one single reason why users of older versions of Windows should upgrade, it’s this: AMSI protection is crucial to helping us defend against many of today’s attacks, particularly those that use fileless techniques.

This attack typifies how most of the fileless attacks that we see work. AMSI provides the capability for Sophos to proactively protect customers against a range of similar attacks, and the telemetry we’re able to get lets us dive into these rabbit holes so we can identify and enhance our protections more effectively.

Sophos endpoint products will detect the components of this attack as AMSI/Reflect-D, Troj/VBSInj-D, and AMSI/ModiRat-A.

IoCs relating to this investigation have been posted to the SophosLabs Github.